With youth leaders like this, it’s only a matter of time until school strikes for climate take off in the US

It’s 10 AM on Friday and -2℉ in New York City. Thirteen-year-old Alexandria Villasenor is worried about frostbite and making her existing cold worse, but it’s going to take more than that to stop her from her weekly school strike for climate outside of UN Headquarters. 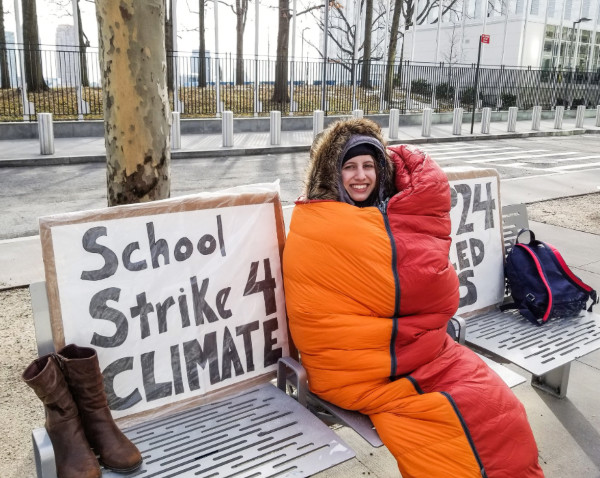 NYC’s polar vortex was no match for Alexandria’s 3 layers of pants, 4 socks, 2 scarves, 2 hoods, a balaclava, and her new sub-zero sleeping bag.

For the past eight weeks, Alexandria has been striking from school every Friday. And she shows no signs of slowing down.

“I am committed to striking for as long as it takes, and that means until we are on a path to do the right thing and cut global emissions in half by 2030.”

(Alexandria is supporting the IPCC timeline to limit warming to 1.5°C, but “thinks they’re being too nice”. I happen to agree – as urgent as the last report was, they continue to sugar-coat it a little.)

Alexandria has always been concerned about climate change. As a 13-year-old who initially grew up in California, it’s the only thing she’s ever known. Epic droughts and wildfires have been the norm for much of her life. She lived right next to a reservoir, Folsom Lake, that provided water for her family and 500,000 others. She watched it dry up.

Alexandria’s fears heightened with the release of the IPCC’s clearest, most alarming report yet about the need for immediate, unprecedented action. And she happened to be visiting friends and family back in California last November when their deadliest fire ever started (the Camp Fire). They were 90 miles away but still forced to breathe the toxic air.

The pivotal moment for Alexandria came in December with the UN climate conference in Poland (COP24). Despite the recent IPCC report warning to cut our emissions in half by 2030, current world leaders did not come up with a plan to get us anywhere near that target.

Alexandria felt that world leaders at COP24 had failed us.

But she was inspired by Greta Thunberg – a 15-year-old Swedish activist who spoke clearly and courageously at the event. Alexandria learned that Greta had been striking from school every Friday since the summer and decided that she would join her by doing the same in New York City at the UN’s Headquarters. She would do it until world leaders started treating climate change like the crisis it is – until they got us onto the right track. 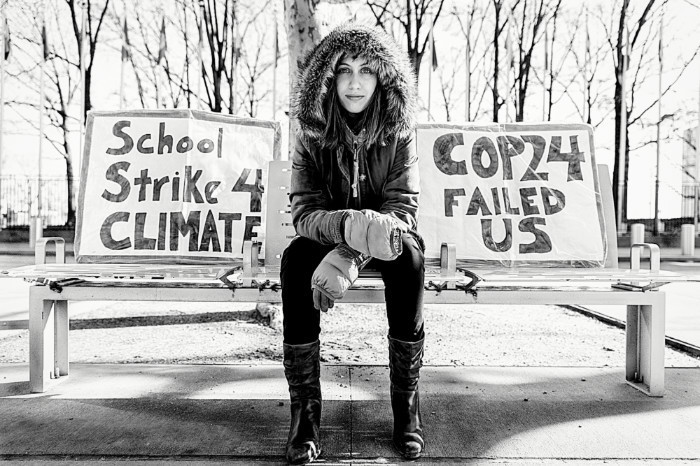 But what will this do? Why does striking make a difference?

“One time, a woman came out to strike with me and she cried telling me how worried she was about her children. That made me realize what I am doing is important and is making a difference.”

“Striking makes a difference because it makes people aware of just how big an emergency climate change is. It is the biggest problem our planet faces. Striking puts pressure on our leaders so they do the right thing for the planet. We are starting to see this work in places like Germany, where thousands of students have been striking every Friday and Germany just agreed to quit coal by 2038*. So real change is possible when people do direct action.”

*2038 is far too slow, but it still shows that lawmakers are paying attention to, and influenced by, the school strikes. Belgium also just had an Environmental Minister resign after a backlash to her questioning the strike’s validity.

Shouldn’t you be in school though?

Alexandria loves learning but thinks school is preparing her and her friends for a future that no longer exists. They aren’t teaching her about climate change and how it’s going to change everything about the world as we know it.

As Alexandria says, “I love to learn. Knowledge is power! My issue with school is that it teaches us to live inside our world’s current system.

At school, we’re taught how to be good consumers and to depend on fossil fuels. We’re taught to keep growing an economy even though our planet can’t handle that anymore. We’re taught that school is important so we can get a good job and make a lot of money. None of this is true.

At school, we’re not taught the science of climate change. We’re not taught how many animals, birds, and bugs are dying. Maybe adults think they are protecting us? But I want everyone to think about what it would be like to find this all out after everything is dead and gone?

I know I would like to learn all of this and I think a lot of other youth are just like me. I also think youth need to be a part of solving this problem, and if we aren’t taught about it, how can we help solve it?

So this is why I am striking! I want more young people aware of what climate change and mass extinction means for our generation! I am striking to put pressure on adults to take action and reduce fossil fuels emissions. We are running out of time.“

But Alexandria is not only raising awareness of the problem and demanding solutions – she’s also figuring out what the future will look like.

“The theme for my strike is Reimagining Our Future”

It was easy for me to forget I was talking to a 13-year-old throughout our conversation. Alexandria is wise beyond her years and has wrapped her head around what’s going on and what we need to do better than 99% of adults…but out of everything, this is what I was most impressed with:

“I am asking youth all over the country to think about what their future looks like under climate change by writing stories and making artwork. In school, youth are taught how to live in a world that won’t exist due to climate change. We aren’t being taught the truth.

So it is up to us to imagine what our world will look like because of climate change and start talking about that future world right now.

I am working with some museums to put up their stories and artwork and we will also be featuring it online. It’s not enough to shut down the schools in America for a day and call on all the world leaders to change their ways to address climate change. My generation has to start thinking and talking about what our future world looks like!”

I think this is SO important. She has accepted that, yes, there is a certain amount of disruption locked-in to our way of life as we know it and that we need to understand what that will look like so we can prepare for it. Since school isn’t teaching kids about the world we’re headed in to, we must do that ourselves.

But also, and perhaps more importantly, by asking people to imagine what our future world could look like, Alexandria is encouraging people to come up with visions of our future – different potential paths and realities we can choose to create. We face a wide spectrum of what is possible right now, all the way from catastrophe at the hands of climate change to a cleaner, healthier, safer, and more equitable place to live if we can get our act together quickly enough.

Until we come together around a vision of the future world that we want to live in, it will be hard to mobilize people. We can’t just say what we don’t want – we need to replace it with a vision of what we do want so people have something to strive for. When enough people see and feel the vision of just how much better the world will be if we eliminate GHG pollutants immediately, I believe their engagement and action will become inevitable.

Having children imagine their future will undoubtedly catalyze greater awareness, engagement, action, and get us closer to the path of a better future. Momentum is starting to build.

National School Strike for Climate comes to the US and Australia on March 15th!

More and more students around the world are joining in on Greta’s “Fridays for Future” movement. It has really taken off in parts of Europe and Australia with hundreds of thousands of students striking in the past two months alone.

Alexandria is doing her best to bring this global movement to the US and is calling for a national school strike on March 15th. She wants it to be so big that schools will have to be shut down! 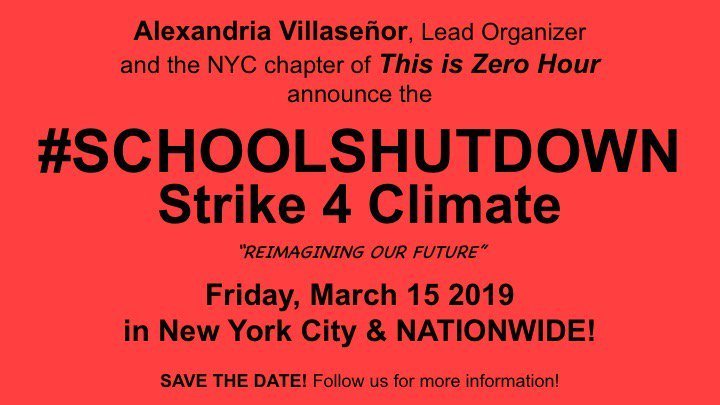 Action: Share this hopeful, empowering story with the youth in your life

Tell the children in your life about their incredible peers around the world who are stepping up to demand their right to a livable future.

Tell your child, nephew, niece, grandkid, neighbor, siblings, friends – tell any young person that thousands of their peers from around the world are taking a stand. Even if they aren’t old enough to vote, they are making sure that their voices and demands are heard. Enough is enough.

The intergenerational injustice and ongoing inaction is unacceptable. Drastic action must be taken immediately – that’s why kids are taking to the streets in the thousands…nothing on this scale has happened in my lifetime that I’m aware of. It will only keep growing until something is done.

Kids know enough to realize that what they’re learning in school won’t matter that much if there isn’t a stable world for them to live in when they finish up their studies.

That’s what this is about. The youth are demanding that we grownups grow up and take us off the path of devastation that we’re currently hurtling down. Their demands are starting to bring fresh energy, hope, awareness, and action.

So tell the kids you know that there is hope.

Tell them that kids just like them are standing up for their generation’s future.

Tell them they are more powerful than they realize.

Tell them their choices matter.

And tell them that, if they decide to, they can make a difference too.

I will be joining my 15-year-old sister at the statehouse in Massachusetts next Friday, 2/15, along with some others. We’ll probably be there around the 10 AM – 2 PM window so I encourage you to join us or swing by if you’re in the area! And I strongly encourage everyone to consider striking on March 15th, whether or not you are still in school. We can all help to bring this movement to our own communities and accelerate the transition to a sustainable world.

Let me know if you are interested in joining the strike or want to learn more. I’m still connecting with different people and figuring it all out myself. 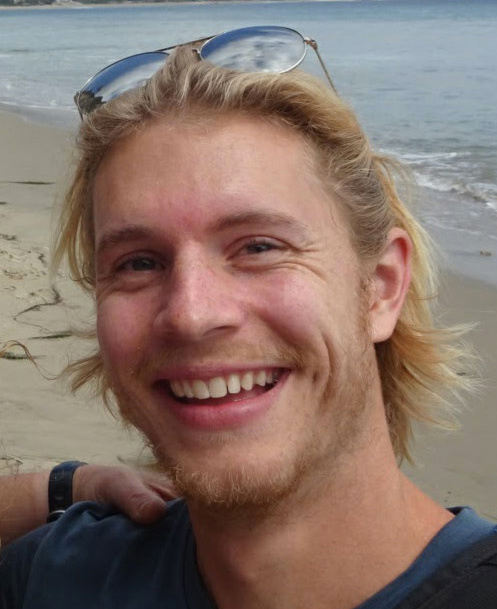