Protesting for a Green New Deal: The Inside Scoop

Last week I told you that I was traveling down to DC with the youth-led Sunrise Movement to pressure Democrats in the House of Representatives to form a Select Committee for a Green New Deal. What I did not tell you was that I was planning on risking (a peaceful) arrest – something the DC police took me and 142 others up on.

It was totally worth it.

I’m getting ahead of myself though.

Here’s How it Went Down

On Sunday morning I met up in Cambridge with 50 other folks to begin the 8-hour journey down to DC by van – bumped into my friend Chris (who introduced me to Ecosia by the way) which was a nice surprise!

We then gathered with hundreds of other Sunrisers around the country for an overview of where we stood. As co-founder Varshini Prakash explains it, “Over the past three weeks, we have heard excuse after excuse for why our Democratic leaders can’t support this committee. We’ve heard, ‘It’s not the right committee.’ ‘It’s not the right time.’ ‘We don’t know enough about it.’ That is not an excuse for jeopardizing my generation.”

The Green New Deal and a specific select committee for it needed more buy-in. We were determined to make it happen.

Next, we got the game plan for Monday, and arrest training for those who were willing. The leaders of this movement are inspiring, as were all the people I met – so many young folks! Many had never done anything like this before. I could feel the energy in the air.

Then we went off to the various Church’s who were gracious enough to host us for the night. I finished up my letter to Congress before bed and explained to my new friends, “Well. This should pretty much do it I think…Yeah…after they read this we should be all set!” Ahh, I crack myself up haha – got a couple others too.

On Monday morning, 1,000 of us went to have our voices heard by our representatives in the House. The first action was simple lobbying. We went to the offices of 50 congress-people. My group went to Joe Kennedy’s office where we had a great chat with his aide (shared our stories, dropped off letters, asked him to ask Joe to support the Select Committee for a Green New Deal).

Then, all 1,000 of us stuffed the halls and offices of arguably the 3 most powerful Democratic leaders in the House. I went to Jim McGovern’s office/hallway with 200 or so others. He’s important because he’s set to become the chairman of the Rules Committee which means he’ll have a lot of control over the creation of select committees like the one we are asking for.

We lined the hall with signs, dropped off more letters, and shared our stories of why we were there. It was all live streamed and covered by several media outlets.

McGovern showed up 30 minutes in. He was genuine and appreciative of our resolve and actually ended up speaking with us for 20 minutes. When it was all said and done, he agreed to support the Green New Deal and the specific select committee we were asking for! 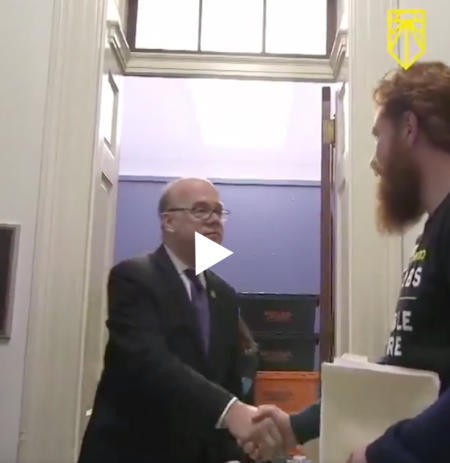 After that win, I hurried off with many others to the office of Nancy Pelosi’s second-in-command, Steny Hoyer. The police were already there. We walked by them to join the ranks of other Sunrisers and sat down to block the entire hallway (they were past conversation stage at that point). We joined in for speeches and songs/chants for addressing climate change and a better world. Peaceful but firm.

After several warnings, the police started arresting us. It was all very civil and cooperative. We continued to sing and cheered on fellow protestors being taken away until they were out of sight. It was quite powerful. I was surprised by all the emotions coursing through me – from belonging and appreciation for all these wonderful people to pride, hope, and determination.

Ultimately, 143 of us were taken to a warehouse where they kept us for about 6 hours, I’d say. It was uncomfortable with the plastic cuffs, took an unnecessarily long time, cost $50 to get out, and the warehouse they kept us in was cold. But overall it wasn’t bad. I met some more great people, have nothing on my record for it, and get to share this story of what it was like with you.

But, most important of all, I got to be a part of something that truly made a difference, no matter how small, in the halls of the most powerful government on Earth. I was pleasantly surprised the next morning to find out the immediate results of our 1,000 person effort.

Before the action on Monday, 22 Representatives supported a select committee on a Green New Deal. But after the lobbying, protests, and arrests that number shot up to 35.

Joe Kennedy was one of the newcomers and he also pledged to take no more money from fossil fuels – big win! 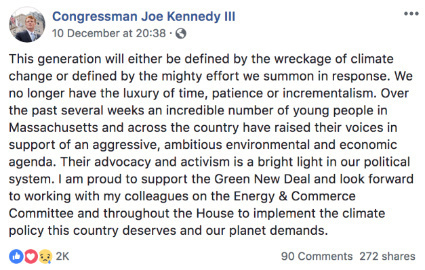 That being said, there’s still work to do. Pelosi is yet to support the new select committee for a Green New Deal but did agree to a meeting with Sunrise after so many were arrested outside her office in DC and many more protesting in her district back home. We shall see if anything comes of the meeting.

As I mentioned last week, the first step is to get a bipartisan select committee created in early 2019 so that the Green New Deal is all set and ready to go as soon as 2021 comes around (when it could have the support needed). That gives plenty of time to hash out details and get buy-in for the rapid decarbonization of our economy. The solutions are there. We just need to make it happen.

Below are a couple videos. They are 3 minutes and 1 minute respectively to give you a feel for the speeches, energy, and youth who made this happen in their fight for a livable world. Both are definitely worth a watch. 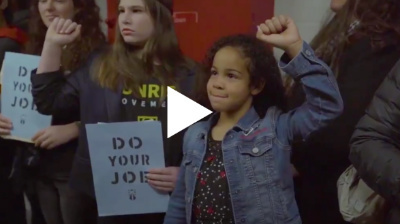 Hope you enjoyed those.

Okay, sorry, one more 3-minute video of the Reverend doing his thing…couldn’t resist – such a powerful speech. 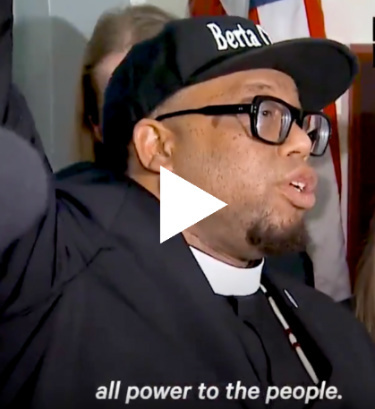 I’ll send you off into the weekend with a quote and an excerpt:

“The most important title is not president or prime minister, the most important title is citizen. It is citizens. Ordinary men and women determined to forge their own future, who throughout history have sparked all the great change and progress. It was citizens here in America who worked to abolish slavery, who marched for women’s rights and worker’s rights and civil rights. They are the reason I can stand here today as President of the United States.” – Barack Obama

The following is the end of an article written by Trevor Noah on millennials.

“…Millennials oftentimes are mocked–people say they’re lazy, that they’re entitled and that they cry about small things (which is true). But they’re also driven. They wish to make a change. They believe that they can make a change, partly because of the information and the tools that they possess.

More than ever, we see that in America. Not only are young people growing into the world of politics, but they’re engaged in a way where they understand that they can actually change the course of history, as opposed to just being a part of it.

In South Africa, we see the same thing–young people standing up and saying we don’t accept the status quo, we can change our destiny, we can change the future, we can be a part of this world. You feel it.