The Surprising Power of Peacefully Protesting

As we both know, we are living through a critical point in human history – perhaps the most consequential time ever. We all play a role in deciding what the future will look like.

As I’ve mentioned a couple of times now, the experts I talked to said these are the four most impactful actions individuals can take to help fight climate change:

If you think about it, in one way or another, protesting checks off three or four of these actions at once.

Too many of us have not exercised the basic right of peacefully protesting.

I hadn’t done it myself until last summer, so I understand why many people don’t protest. It seems like it’d be uncomfortable. What are other people going to think about you? It’s time out of your day. And it won’t really make any difference whether you go anyway, right?

I’ll start by mentioning that some of the biggest names in our history books are known for the instrumental roles they played in righting wrongs through massive social movements and forever changing society’s narrative and norms. Think: Gandhi, Martin Luther King Jr., Susan B. Anthony, Nelson Mandela, and Henry David Thoreau to name a few.

Protesting was key in all of their victories. Let’s not forget to respect, appreciate, and learn from these giants upon whose shoulders we stand.

Protests send powerful ripples that impact a variety of people and outcomes:

When you join a protest, you make it easier for others to join as well and influence far more people than you realize.

Check out this 3-minute Ted Talk for a great (and amusing) example of how powerful followers are! In just three minutes, one man turns a peaceful park into a massive dance party.

I share this with you because there are some very exciting sustained protests/movements that came out of nowhere (Greta Thunberg’s School Strike For Climate, the Sunrise Movement, Extinction Rebellion). By joining them, you are one of these early and crucially important followers. You are influential. Your action really helps the movement to snowball by making it easier, and eventually expected, for others to join in.

Greta started the school strike last August. Over 100,000 have joined her protest since then. But it’s still in the early stages (if she’s the lone dancer in the video, maybe 5 people have joined her so far). Same goes for the Sunrise Movement. Their first big protest in November had 150 people. The second had 1,000. They’re shooting for 10,000 at the first presidential debate.

Be an early follower in these protests and movements. It’s an incredibly impactful action.

We need these movements for climate action to snowball. As fast as possible.

By exercising this basic right of democracy and putting sustained, popular pressure on our communities, nations and the world as a whole, we help to get ourselves on the right track.

“The one thing we need more than hope is action. Once we start to act, hope is everywhere.” – Greta Thunberg

Small and cold. But also hilarious, social, hopeful, and satisfying.

I’ve only protested a few different times now. They were all completely peaceful…although I did get arrested once in the halls of Congress (totally worth it). Last Friday’s protest was easily the smallest, but also the most fun (you’ll see why soon).
My brother and I joined our sister whose a Sophomore in high school for her first school strike. 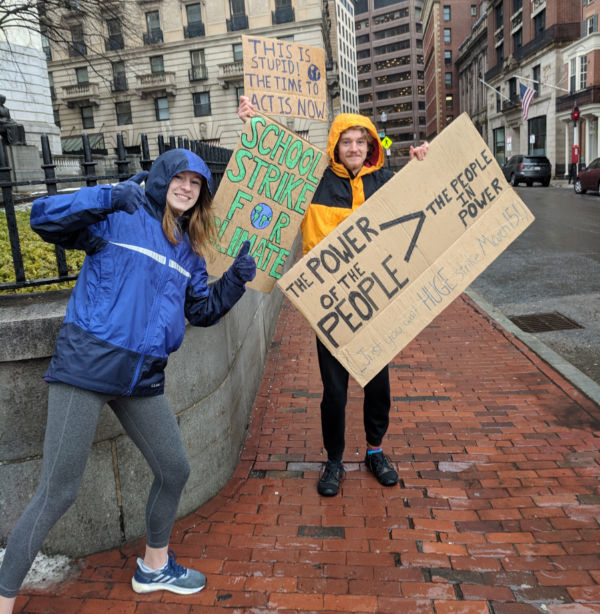 We posted up outside the State House so that cars and people walking in and out would see us. We had our first friendly honk almost immediately getting us off to a good start. It was the beginning of a bunch of interactions with strangers.

Most people just walked by without saying anything while trying to read our signs out of the corner of their eyes. Most people in cars looked too. I’d guess we exchanged greetings or had conversations with 25% of people.
First, there was the journalist. About 30 seconds after walking by us on his way to the State House, he doubled-back to ask some questions and see what exactly we wanted lawmakers to do. He was mainly talking to Nicki who did a pretty good job fielding them 🙂

Then there was the lady who wanted to know what we were up to. She had never heard of climate change or global warming before…and after agreeing that the weather is getting totally whacky, she informed us it had nothing to do with greenhouse gases, but rather, it was from something going on “upstairs”.

But then the real superstars showed up with their Mom. 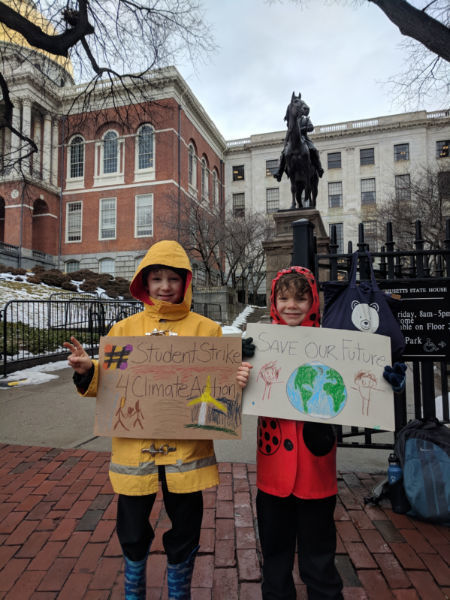 Our hilarious, adorable, and inspiring partners in crime! (6 and 4 years old)

These two made our day.

They were a couple of characters and talked about everything under the sun. The younger one kept saying “climate change” in a sing-song voice like he was selling popcorn at a ballgame. His Mom encouraged him to say “climate action” instead, but he kept forgetting and “climate change!” won the day.

Not surprisingly, we got a lot more attention for the 20 minutes they lasted in the cold…someone said they may have made their way to the governor’s office afterward – not totally sure. Either way, they crushed it.

This stuff is so simple even a child can wrap their head around the basics. I can’t help but wonder how different the world will be when these two are my age in 2040. Talk about inter-generational injustice.

All in all, we definitely raised awareness, had some good conversations, made some new friends, and influenced an unknowable amount of people directly and indirectly.

Who knows if that journalist talked to anyone inside the State House about us, or will be influenced in future articles? Who knows how many people told their friends about our action or shared their pictures of us on social media? Who knows how many more people it could bring in to the global strike on March 15th?

We’ll never know, but regardless – not too shabby for just six people and a few hours of work!

Tell the children in your life about this event! They may be interested in investing their time for a livable future along with hundreds of thousands of their peers around the world. 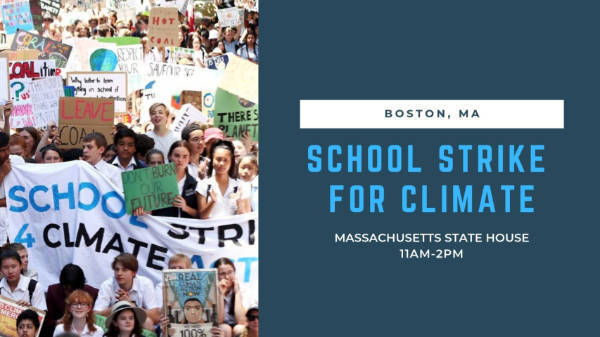 Boston event details on Facebook here (thanks to Crowdsourcing Sustainability’s new Director of Social Media, Hannah, who’s a student at Brandeis University for putting it together).

If you’re outside of Boston, but in the US, go here to find an event near you. Here’s one for Aussies.

Hope to see you out there!