The *Most Important* Action of the Year

(*The views in this article are the personal views of Ryan, not the organization.)

I hope you are well or coping to the best of your abilities in these trying times.

As Benjamin Franklin walked out of the Constitutional Convention in 1787, Elizabeth Powel asked him, “Well Doctor, what have we got? A republic or a monarch?”

“A republic, if you can keep it.” – Benjamin Franklin

Yes, based on Trump’s repeated words and actions, I believe we need to at least think through the worst case scenarios now in the US: that he undermines the election and refuses to leave.

“If we are wise, let us prepare for the worst.” – George Washington

More on our democracy crisis in a little.

But first, let’s be clear on one thing – Trump will not decide whether or not he leaves office. We will.

The most important action of the year

On the laundry list of reasons to exercise our power and duty as citizens to speak up and vote is the fact that this is likely the most important thing we can collectively work on this year when it comes to the climate crisis.

The US needs to cut greenhouse gas emissions in half in the next ten years (really more than that to account for justice and to help accelerate global action).

There are two possible paths forward.

We could have four more years of Trump. I’ll let energy and climate expert David Roberts take this one:

“If Donald Trump is reelected president, the likely result will be irreversible changes to the climate that will degrade the quality of life of every subsequent generation of human beings, with millions of lives harmed or foreshortened. That’s in addition to the hundreds of thousands of lives at present that will be hurt or prematurely end.” – David Roberts

Or four years of Biden who actually has a pretty good climate plan. In fact, it’s the centerpiece of his economic plan and significantly stronger than Bernie’s plan in 2016 or any of the states’ plans (huge shoutout to all our climate activists for helping to make this happen – especially the Sunrise Movement!)

What happens between now and November 3rd will determine which path we go down.

…though we may have to continue the fight beyond that so the election isn’t stolen. Unfortunately, Russia is interfering in our elections (again). The FBI is warning of online disinformation attacks to undermine the legitimacy of the election results. A legal advisor for the Trump campaign has already said they will challenge ballots counted after election day (in fact, Republican Senator Rick Scott from FL just drafted a bill saying votes not counted within 24 hours of election night won’t count).

And then there’s this, “the Trump campaign is discussing contingency plans to bypass election results and appoint loyal electors in battleground states where Republicans hold the legislative majority. With a justification based on claims of rampant fraud, Trump would ask state legislators to set aside the popular vote and exercise their power to choose a slate of electors directly.”

Trump will likely claim victory on election night if he has a lead. He’ll do this because he knows a “blue shift” is coming in the days after the election (like in 2018) as the (mostly Biden) mail-in votes get counted…at which point he’ll cry foul play.

He’s looking at the polls and is scared he will lose. So he may see undermining the legitimacy of the election as his only chance of holding on to power (and possibly staying out of jail).

So, unfortunately, we not only have to try and stop Trump and his enablers from undermining the election process before November 3rd, but we will also likely have to deal with him contesting the results of the election itself in the days, weeks, and maybe months that follow.

The best defense against all of this – the best way to save democracy and take big steps on climate is to defeat Trump in a landslide.

What can you do to help?

Make sure you are registered and have a plan to vote.

Just as importantly, ask your friends and family if they are voting. Encourage them and help them to if need be.

Remember, your family and friends inherently tend to trust and listen to you more than they do the news or campaigners. This love tap of peer pressure works about as well now as it did in middle school. Use it.

This is especially important if you know people living in the following swing states because this is where the election will ultimately be decided: Pennsylvania, Florida, Wisconsin, Arizona, North Carolina, Michigan, Minnesota, New Hampshire, Nevada, Texas, Georgia, Iowa, or Ohio. 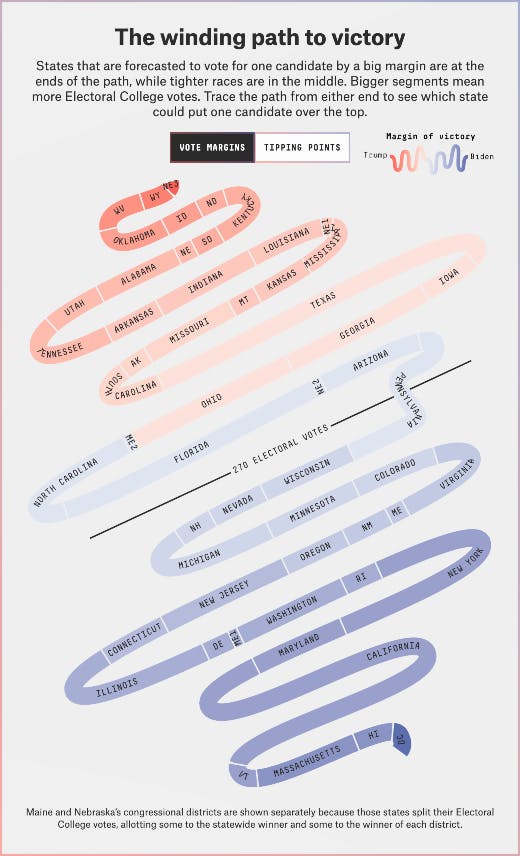 (The Senate races are also crucial. Go here to see which ones are closest.)

(This is just what I’m thinking at the moment. Feel free to borrow from it if you find anything useful or share ideas to help me improve it…obviously, only you can or should decide between in-person and mail-in voting.)

My plan is to…

(Side note – I’m also an extremely proud brother and son right now. My sister (who can’t even vote yet) and Mom are helping to get out the vote for the first time ever by writing hundreds of postcards to people in PA and FL.)

But this is way bigger than us.

And we only get to do the next 38 days once.

We will win if we all fight for our future together.

So let’s help make it happen.