…okay one more thing. My brother and I are joining my sister today on her school strike for climate at the Massachusetts statehouse from 10:30 to 1. If you’re in the area, come say hi!

More and more Americans are waking up!

Thankfully, the truth about climate change is increasingly winning the battle over misinformation – better late than never, right?!

A recent survey out of Yale shows that 59% of Americans are “Alarmed” or “Concerned” about climate change.

The number of people who are “Alarmed” has doubled in just 5 years, with half of the increase coming in the last year alone. The “Alarmed” now outweigh the “Dismissive” 3 to 1, compared to an even 1 to 1 in 2013…it’s still not even close to what the experts would say (the ratio would be closer to 33 to 1), but, you know, we’re moving in the right direction. 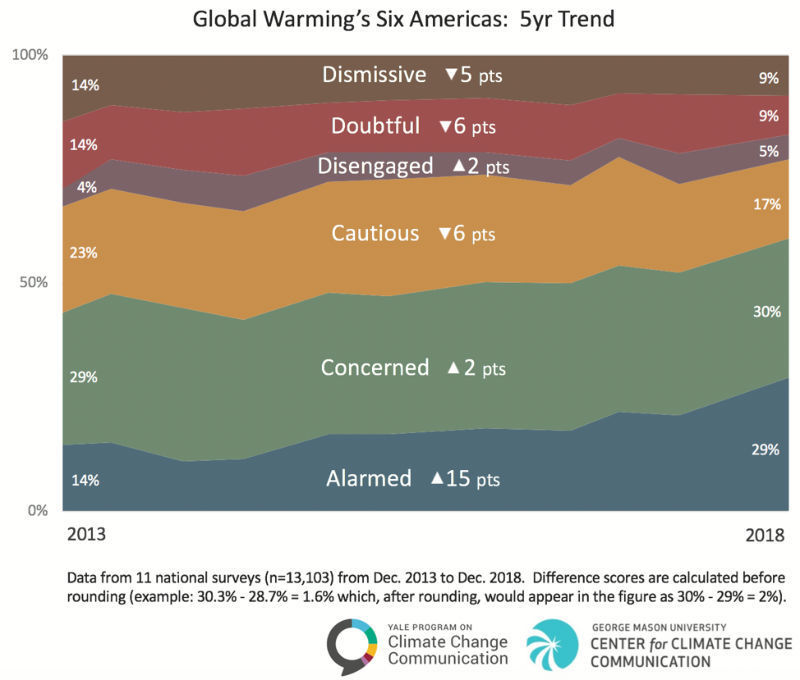 This trend is really good news and should give us all hope. Keep pushing forward!

Many who are “Alarmed” or “Concerned” are still, on some level, in denial

This idea came to me recently as I started reading Naomi Klein’s “This Changes Everything”.

You know those moments when someone says something you’ve always felt/known but have never heard articulated before? And then you’re like “YES” when you hear it – reading the passage below was one of those moments for me.

She expresses some of the ways people deny climate change extremely well.

I wanted to share this with you because I think it’s important that we identify and name these subtle denials so from now on we can recognize them and call them out for what they are – whether we think them or hear it from others.

It’s a necessary step for more people to come to terms with what we’re up against and start treating it like the crisis it is. Many of you reading have been down this path already – it is a path, and it takes time and guidance to get down. As more people truly accept the reality of our situation, more resources, energy, and time flow into addressing the problem. We need as much of that as we can get!

Importantly, Naomi also explains how she moved passed her denial. Because we must change everything to prevent the worst, we have a huge opportunity to fix existing problems, and rebuild society into one that’s much better than the one we live in today.

I think both parts are important for all of us to be aware of – for us personally, and so we can relay these insights to our family and friends.

Passage from “This Changes Everything”:

“I denied climate change for longer than I care to admit. I knew it was happening, sure. Not like Donald Trump and the Tea Partiers going on about how the continued existence of winter proves it’s all a hoax. But I stayed pretty hazy on the details and only skimmed most of the news stories, especially the really scary ones. I told myself the science was too complicated and that the environmentalists were dealing with it. And I continued to behave as if there was nothing wrong with the shiny card in my wallet attesting to my “elite” frequent flyer status.

A great many of us engage in this kind of climate change denial. We look for a split second and then we look away. Or we look but then turn it into a joke (“more signs of the Apocalypse!”). Which is another way of looking away. Or we look but tell ourselves comforting stories about how humans are clever and will come up with a technological miracle that will safely suck the carbon out of the skies or magically turn down the heat of the sun. Which, I was to discover while researching this book, is yet another way of looking away.

Or we look but try to be hyper-rational about it (“dollar for dollar it’s more efficient to focus on economic development than climate change, since wealth is the best protection from weather extremes”)—as if having a few more dollars will make much difference when your city is underwater. Which is a way of looking away if you happen to be a policy wonk.

Or we look but tell ourselves we are too busy to care about something so distant and abstract—even though we saw the water in the subways in New York City, and the people on their rooftops in New Orleans, and know that no one is safe, the most vulnerable least of all. And though perfectly understandable, this too is a way of looking away.

Or we look but tell ourselves that all we can do is focus on ourselves. Meditate and shop at farmers’ markets and stop driving—but forget trying to actually change the systems that are making the crisis inevitable because that’s too much “bad energy” and it will never work. And at first it may appear as if we are looking, because many of these lifestyle changes are indeed part of the solution, but we still have one eye tightly shut.

Or maybe we do look—really look—but then, inevitably, we seem to forget. Remember and then forget again. Climate change is like that; it’s hard to keep it in your head for very long. We engage in this odd form of on-again-off-again ecological amnesia for perfectly rational reasons. We deny because we fear that letting in the full reality of this crisis will change everything. And we are right.

We know that if we continue on our current path of allowing emissions to rise year after year, climate change will change everything about our world. Major cities will very likely drown, ancient cultures will be swallowed by the seas, and there is a very high chance that our children will spend a great deal of their lives fleeing and recovering from vicious storms and extreme droughts. And we don’t have to do anything to bring about this future. All we have to do is nothing. Just continue to do what we are doing now, whether it’s counting on a techno-fix or tending to our gardens or telling ourselves we’re unfortunately too busy to deal with it.

All we have to do is not react as if this is a full-blown crisis. All we have to do is keep on denying how frightened we actually are. And then, bit by bit, we will have arrived at the place we most fear, the thing from which we have been averting our eyes. No additional effort required.

There are ways of preventing this grim future, or at least making it a lot less dire. But the catch is that these also involve changing everything. For us high consumers, it involves changing how we live, how our economies function, even the stories we tell about our place on earth. The good news is that many of these changes are distinctly uncatastrophic. Many are downright exciting. But I didn’t discover this for a long while.

I remember the precise moment when I stopped averting my eyes to the reality of climate change, or at least when I first allowed my eyes to rest there for a good while…

…Listening to Navarro Llanos describe Bolivia’s perspective, I began to understand how climate change—if treated as a true planetary emergency akin to those rising flood waters—could become a galvanizing force for humanity, leaving us all not just safer from extreme weather, but with societies that are safer and fairer in all kinds of other ways as well. The resources required to rapidly move away from fossil fuels and prepare for the coming heavy weather could pull huge swaths of humanity out of poverty, providing services now sorely lacking, from clean water to electricity. This is a vision of the future that goes beyond just surviving or enduring climate change, beyond “mitigating” and “adapting” to it in the grim language of the United Nations. It is a vision in which we collectively use the crisis to leap somewhere that seems, frankly, better than where we are right now.

After that conversation, I found that I no longer feared immersing myself in the scientific reality of the climate threat. I stopped avoiding the articles and the scientific studies and read everything I could find. I also stopped outsourcing the problem to the environmentalists, stopped telling myself this was somebody else’s issue, somebody else’s job. And through conversations with others in the growing climate justice movement, I began to see all kinds of ways that climate change could become a catalyzing force for positive change—how it could be the best argument progressives have ever had to demand the rebuilding and reviving of local economies; to reclaim our democracies from corrosive corporate influence; to block harmful new free trade deals and rewrite old ones; to invest in starving public infrastructure like mass transit and affordable housing; to take back ownership of essential services like energy and water; to remake our sick agricultural system into something much healthier; to open borders to migrants whose displacement is linked to climate impacts; to finally respect Indigenous land rights—all of which would help to end grotesque levels of inequality within our nations and between them.

And I started to see signs – new coalitions and fresh arguments – hinting at how, if these various connections were more widely understood, the urgency of the climate crisis could form the basis of a powerful mass movement, one that would weave all these seemingly disparate issues into a coherent narrative about how to protect humanity from the ravages of both a savagely unjust economic system and a destabilized climate system. I have written this book because I came to the conclusion that climate action could provide just such a rare catalyst.”

These last thoughts are something I can’t emphasize enough. It’s a crucial and often missing part of the climate narrative:

Mitigating climate change immediately not only minimizes destruction and human suffering – it also leads us to a much healthier, safer, and more just world.

As always, feel free to reach out if you want to chat about absolutely anything – I’d love to hear from you!