Yes, Global Warming May Be to Blame for These Winter Extremes

Although counter-intuitive, global warming is likely the reason why parts of the Northern hemisphere have been experiencing more extreme cold-snaps and heavy snowstorms. I know the Midwest got crushed this week and I’ve experienced some extremes personally here in Massachusetts as well. On average, the world is getting warmer, but that doesn’t mean every day will be warmer in every part of the world.

It’s important to understand that the average world temperature isn’t really different during this time – we’re just getting the cold from the Arctic that normally stays up at the pole. In other words, that cold is just in a different spot than it normally is. If you look at the picture above, you can see most of it is red, meaning warmer than average. In fact, although it’s freezing in the US right now, Australian’s are dealing with vicious heat waves and setting extreme heat records left and right.

So why is it getting so damn cold?

This week, the Midwest is facing some of its coldest temperatures ever. Some days will have highs of -14°F in Minneapolis and Chicago, with windchill lows down to -60°F. You could get frostbite in 5 minutes. What in the world is going on?

As you may have noticed, these extreme freezes have been happening more often than they used to.

It turns out that these extreme cold-snaps may be increasing because of how quickly the Arctic is warming. Talk about counter-intuitive.

This is not completely settled science, but the evidence is mounting that global warming is to blame for the changing jet stream (and the jet stream is the reason for the increasing cold-snaps).

The jet stream is basically a river of wind high above us that circles the Arctic, acting as a boundary that keeps cold air up at the pole. It is largely driven by the big temperature difference between the Arctic and mid-latitudes. The jet stream’s positioning and strength play a big role in our weather.

Although Earth is getting hotter everywhere, the Arctic has warmed at least twice as fast as the rest of the world due to melting sea ice. This means that the difference in temperature between the Arctic and mid-latitudes has decreased, which is causing the jet stream to slow down. 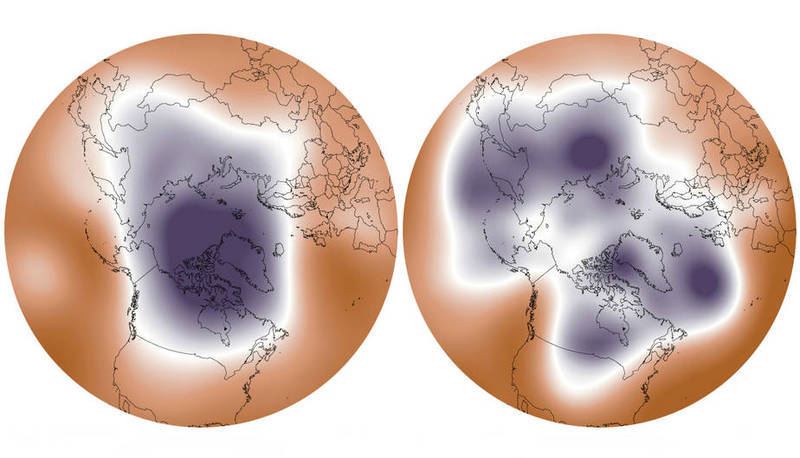 So a slower, wavier jet stream is bringing us more freezing cold spells. We can thank it for 2014’s famous “Polar Vortex” and 2018’s “Beast from the East” in Europe along with many others. It’s important to understand that the average world temperature isn’t really different during this time – we’re just getting the cold from the Arctic that normally stays up at the pole due to the weaker jet stream.

The jet stream waviness may be causing a slew of other issues as well. Typically the jet stream moves our weather patterns from west to east as it circles the globe counterclockwise, which is good. But when it’s wavy it moves these weather systems much slower than it normally would – essentially blocking them and keeping them in place. This can lead to “epic droughts, wildfires, and flooding events.” according to Penn State climate scientist Michael Mann.

Locking the storm in place played a key role in the amount of flooding and damage we saw in Hurricanes Harvey, Sandy, and Florence.

We all know that water changes from a liquid to a gas when it gets hot enough. A warmer world means there’s more evaporation and the atmosphere holds more water (vapor). We also know that what goes up must come down. More water in the atmosphere means more precipitation. This can come in the form of rain or snow. Monster snowstorms should be expected. Global warming just means they have more and more ammo to work with. 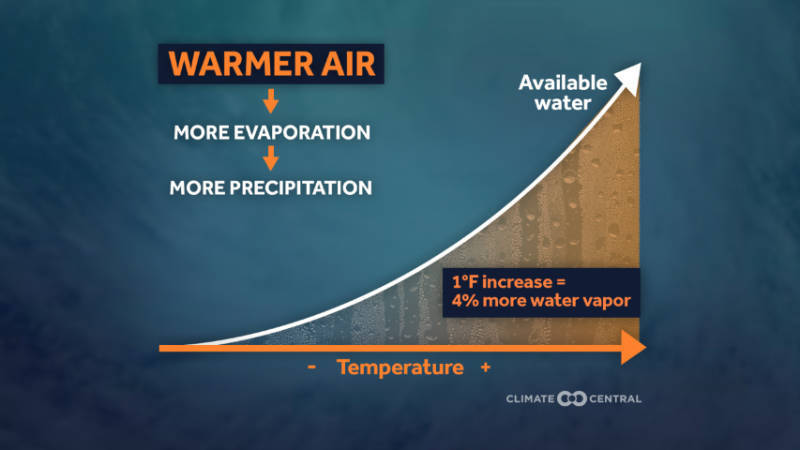 We’re close to 2°F increase already, so that’s 8% more water vapor on average (and growing) for storms to work with.

So now you know. “Global warming” is accurate in the big picture, but “climate change” or “global weirding” is a better way of understanding the weather extremes we are increasingly facing like floods, droughts, stronger storms, extreme heat, or extreme cold.

So to my friends in New England, the Midwest, and Canada – stay warm! And for my friends down in Australia – stay cool!