The Climate Crisis: Where we stand and what to do about it

This is the main thing people are still totally failing to grasp so let me repeat it:

“Climate change and our response to it is going to change the world over the next 25 years as much as the internet did in the last 25 years.” – Joe Romm

Unfortunately, climate change will be much worse than most anyone expects (myself included).

And that is because the climate is the context in which everything else takes place.

Our food supplies, water supplies, health, economy, and the basic habitability of where we live are increasingly at risk due to extreme weather, rising seas, and loss of wildlife – the effects of which are not linear, but rather compound over time and interact in unpredictable ways. (…because everything is interconnected and increasingly strained.)

The infrastructure we’ve built and the global, interconnected systems society relies on are woefully unprepared.

And it’s worth noting – all we have to do to bring about unimaginable suffering, destruction, and death in the future is…nothing. Nothing at all.

The status quo is killing life on earth at horrifying rates and it’s only projected to get worse.

This is why “calling for disruptive change is not radical, but deeply sane.” – Alex Steffen.

We have a choice.

“We on Earth have just awakened…We are the legacy of 15 billion years of cosmic evolution. We have a choice: We can enhance life and come to know the universe that made us, or we can squander our 15 billion-year heritage in meaningless self-destruction. What happens next depends on what we do, here and now, with our intelligence and our understanding of the cosmos.” – Carl Sagan

There is a massive difference between a 2°C world and a 3°C+ one. And, as far as we know, we still have a lot of control over how much hotter our home will get. Through our actions from here on out, we will collectively choose where we end up.

And although the effects of global warming will be far worse than most anyone expects, we also have the capacity to rebuild a better society much faster than most anyone thinks is possible.

We think linearly. But these climatic and social processes move exponentially.

So the question of course is…

How can you and I help reverse warming as fast as possible?

The IPCC says we need “rapid and far-reaching transitions” in every aspect of society that are “unprecedented in terms of scale”.

Fortunately, society already has the solutions to reverse global warming.

What we’re missing is the power to implement them.

Elizabeth Sawin calls this the ‘power to change direction gap’.

“Think of it as the gap between our current influence on the decisions that determine future emissions and the amount of influence we would need to close the emissions gap. The ‘power to change direction gap’ is the one that will close first. Once it closes the emissions gap will follow… Even if no one is going to hand us a report about these “softer” variables anytime soon, they are real, and they matter.”

“The possibility of swift change lies in people coming together in movements large enough to shift the Zeitgeist.” – Bill McKibben

“Political will is not some final item on the grocery list to be checked off once everything else is in the cart. It is everything. None of the rest of it, none of the available policies and technologies, mean anything without it.” – Dave Roberts

Perhaps the best way to conceptualize and measure this power to change direction is through the “3.5% rule”.

Erica Chenoweth’s exhaustive research shows that it takes, at most, 3.5% of a population’s active, sustained, and non-violent participation to overthrow an existing power structure.

Though her research focused on national scale campaigns, she believes the 3.5% rule likely applies to smaller-scale efforts as well.

For example, a mere 1% of Amazon employees are turning the behemoth into a climate leader and their CEO into a major climate philanthropist.

This grassroots power is succeeding where nothing else has for decades.

It is the first domino in the sequence of transformative change.

This is the power that needs to be built in the places we live and work.

Thinking about your role

“The most impactful act an individual can do will depend on that person’s life, knowledge, community, influence, relationships, courage. It will be different for everyone. Together, we act and make a difference. It is not about what “I” can do. It is about what we can do. Carbon is an atom (and molecule) that holds hands and collaborates. That is what global warming is telling us to do.” – Paul Hawken

Yes, we absolutely need to help climate leaders get into office. And yes, it’s good to minimize your carbon footprint.

But perhaps the most immediate and influential work any one of us can do is to start moving the needle in the places we live and work.

Jeremy Grantham said it quite well. And though he was speaking to investors, the underlying message applies to all of us:

“I want you to go back to your investment firms, cash in your career chips, and get your bosses to go greener and lean on their portfolio companies to be greener—then you’ll be able to look your grandchildren in the eye.”

Each one of us can reach the people we know, and influence the institutions we’re a part of, better than anybody else can.

This is where our true power rests. Let’s wake it up.

Rather than inadvertently harming us, let’s get our schools, hospitals, communities, companies, and governments to help us – like they’re supposed to.

Tips for building the needed 3.5% of people where you live and work

First, see if there’s an effective group that’s already working towards zero emissions. If there is, join them. If not, start talking with people and figure out how best to organize.

I like to think about this in two buckets:

“The most important thing you can do to fight climate change: talk about it” – Katharine Hayhoe

We can’t reverse global warming without talking about it.

It’s true that Americans rarely or never talk about the climate emergency (64%).

But speaking up on climate isn’t as risky or unpopular as we think it is.

The majority of people are worried about it (60%). Plus the solutions are massively popular because they’re nearly always win-wins.

So talk to your friends, family, and co-workers about the climate emergency and why addressing it is important to you.

The famous Asch Conformity Experiment shows that your single voice speaking up for climate action makes it significantly easier and more likely for others to follow suit.

If you’d like some tips or examples on how to do this, go to the following headings in each article:

Over 25% of people say they want to act on climate.

That’s more than enough people to start making the places we live and work climate-positive.

Most people who want to act simply haven’t been asked to by anyone. We just need to find each other and organize.

Like I mentioned, just 1% of Amazon employees have gotten some huge wins in a very short amount of time. Due to employee demand, Amazon has pledged to be carbon neutral by 2040. And Bezos personally just pledged $10 billion to climate action. The “Amazon Employees for Climate Justice” have several more obstacles to hurdle, but their progress to date is impressive.

Perhaps the best place to start is by writing a joint letter asking your CEO for organizational leadership on the climate emergency.

Here are two wonderful examples from employees at Immediate Media and Amazon. (I would encourage you to throw in this quote: “If some companies and industries fail to adjust to this new world, they will fail to exist.” – Mark Carney, Bank of England’s Governor)

At the national level, look no further than New Zealand or the UK which have each passed net zero laws by 2050 on the backs of massive protests (NZ hit that magic 3.5% of protesters in September).

If you join others or start organizing to take meaningful, strategic climate action, people will join you.

You’re far more powerful than you realize. Watch the fun Ted Talk below called “How to Start a Movement” that highlights your power. 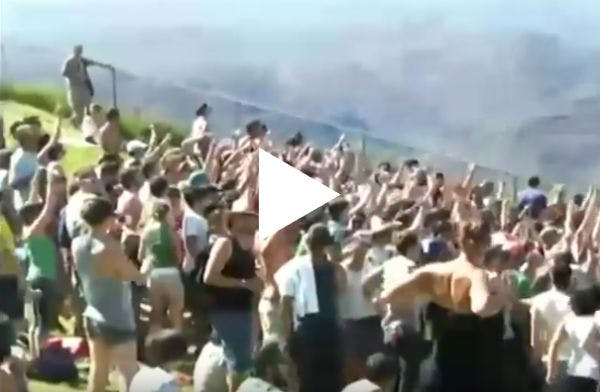 Though I wish it needn’t take an existential threat to elicit, I think there are some beautiful silver linings for this dire situation we find ourselves in. We humans are being forced to:

These are all amazing by-products of the struggle to protect the people we love and the places we call home.

None of this is going to be easy.

Because we have so much to fight for.