Climate change is complex. Some concepts can be tricky and many numbers are incomprehensibly big.

This is the story of what’s happening, why, and what to do about it using as many analogies as possible.

Earth has a serious fever

That may not sound like a huge deal because we typically think of it like the temperature outside. A 60°F day vs a 66°F day.

If you had a fever that high, you would be in the hospital…possibly fighting for your life.

Why is this happening?

Civilization, in its present form, is largely powered by burning dead plants and animals (aka fossil fuels).

Burning these fossil fuels dumps over 1 million tonnes (over 2 billion pounds) of greenhouse gas emissions into our atmosphere every ten minutes – as if it were a sewer. 1

This is what 1 million tonnes of CO2 looks like next to downtown Toronto: 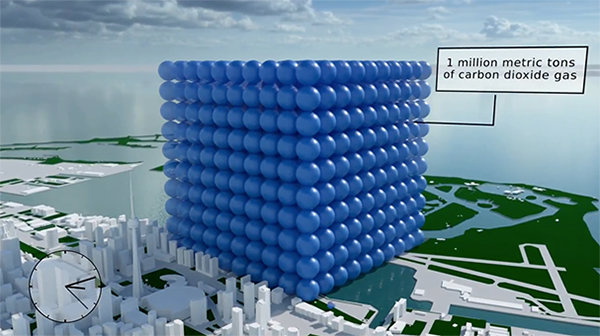 (That much CO2 every ten minutes.)

You can think of these extra emissions as significantly adding to the existing blanket of greenhouse gases around Earth.

Since 1870, humanity has effectively created an extra blanket of CO2 so massive that, if wrapped around Earth’s surface, it would:

Let that sink in.

Luckily, the ocean and land naturally suck up some of it. So only 41% of that CO2 5has stayed in the atmosphere (3.4 feet and 976 billion tonnes).

But every day we add a layer of CO2 to that deadly blanket that’s about 1.27 pieces of paper thick. That’s an extra 1.55 inches of CO2 blanket each year. 6

CO2 emissions alone have made the blanket in our atmosphere 48% thicker since the industrial revolution.7

(This only includes CO2 by the way…historical data for the other GHGs was trickier to come by.)​

Two more things to better understand the impact of society’s failing system and the power of this blanket:

So what? Why does this matter?

This has fundamentally changed the composition of our atmosphere and oceans.

It matters because the conditions upon which civilization was built no longer exist.

Civilization relies on the stability and predictability of the complex climate system for our most basic necessities (that we so often take for granted) like food, water, and safe places to live.

You can think of it as if we’ve loaded the weather dice.

(Data from NASA. More details on this analogy here for it to fully make sense.)

With climate change, the dice are now loaded so that higher numbers are rolled much more often and we drew some extra dots on the dice so that we can now roll higher than a 12.

So to reiterate – this is happening now. And it’s happening to all of us (albeit unevenly).

…but this is all kinda vague. You probably want specific examples of these climate change impacts, right? 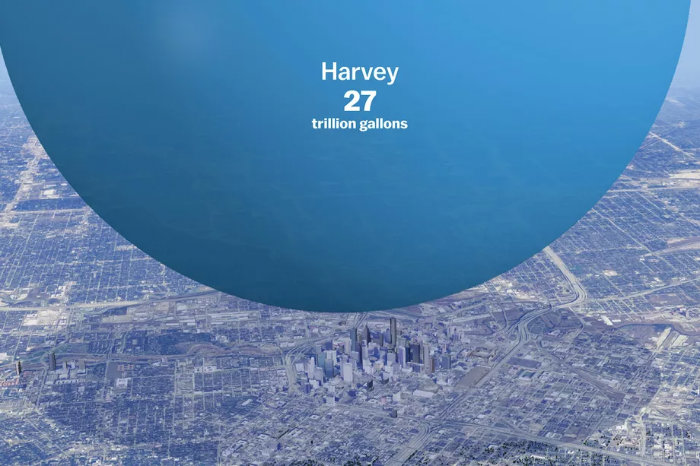 (Not to mention the fact that the same burning of fossil fuel that is causing the climate crisis is also killing 7 million people a year via air pollution. That’s like six 9/11’s happening around the world every single day. This is already a largely unnoticed health emergency.)

I could go on…

We’ve known about this for decades. Why hasn’t it been fixed?

1. We hadn’t grasped the dire urgency of the situation or just how much is at stake in the near term.

Climate change is slow-moving and happens incrementally…so we were kind of like that frog being boiled in water, not noticing just how much things have changed – making it easier to believe that it was a distant threat that doesn’t matter to us, here and now.

If you are 33 or younger you’ve never experienced a cooler-than-average month compared to 1950-1981 temperatures.

That baseline is even a bit conservative. If you were to use 1881 – 1910 temperatures, you’d have to be over 53 years old to have lived through a cooler than average month (great chart).

2. More importantly, the fox is in charge of the hen-house.

Despite knowing the catastrophic consequences of their actions, the fossil fuel executives have played many of us like fools. And bought off the most powerful among us.

They’ve manufactured doubt about the science and scientists. They throw money against every major effort to make society more sustainable.

The most profitable industry in the history of our species – fossil fuels – has used its power to run incredibly effective disinformation campaigns and continue to buy or threaten our elected officials so they do not take the required, drastic actions that science demands.

Instead of putting a price on fossil fuels that reflects their true costs on society, our governments are subsidizing them – subsidizing our self-destruction.

The IMF estimates that the fossil fuel industry gets about $1 million in subsidies every minute. And $7 to $10 million a minute if you include externalities.

So…this is a lot. Does what I do actually matter?

Yes. And thank goodness for that!

Some ideas and links to explore:

Truth be told, we’ll never know the ripple effects of most of our actions.

But a small action does have the power to set off a sequence of much greater events. Fun video example below from the Drawdown conference I was at recently (thanks for the demo Daniel!) 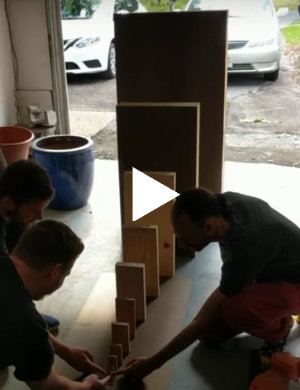 What can we do that makes a real difference?

I’m actually working on a top ten list for this. But for now, I’ll stick with the four most effective actions 16 sustainability experts shared with me.

Talk to the people you know about climate change and why it’s important to you. If we’re not talking about it, we’ll never take action.

Push for climate policies that are in line with what the science demands, not what is “politically feasible”. Bills for carbon pricing and initiatives like the Green New Deal are excellent (remember we need to cut global emissions in half by 2030 and be net zero by 2050).

Bringing it home with gratitude

Fun things we never think about:

“We on earth have just awakened from the great oceans of space and time from which we have emerged. We are the legacy of 15 billion years of cosmic evolution. We have a choice. We can enhance life and come to know the universe that made us or we can squander our 15 billion-year heritage in meaningless self-destruction. What happens in the first second of the next cosmic year depends on what we do, here and now, with our intelligence and knowledge of the cosmos.” – Carl Sagan

You are a representative of an unbroken lineage of life going back 3.8 billion years.

The amount of events that needed to occur exactly as they did for each of us to be here right now is mind-boggling.

The odds of you existing at all are roughly 1 in 400 trillion.

“It is the probability of 2 million people getting together each to play a game of dice with trillion-sided dice. They each roll the dice and they all come up with the exact same number—for example, 550,343,279,001. A miracle is an event so unlikely as to be almost impossible. By that definition, I’ve just shown that you are a miracle. Now go forth and feel and act like the miracle that you are.” – Dr. Ali Binazir

We are so lucky to be here.

Life is a gift.

Together, let’s do what we can to make it a good one – not just for ourselves and life on Earth today, but for all of those who come after us.