The Cape Town Water Crisis, Our Progress on Plastic, and a New Approach to Climate Activism!

Momentum is building against single-use plastics!

Plastic is a big problem. Only 9% of all plastic ever made has been recycled. The rest goes to landfills, the ocean, and in plain sight.

Countries around the world are starting to take action on this issue and in a big way. Two of the most notable are recent announcements from India and the EU.

India has 1.3 billion people and is home to the fastest growing major economy. They just pledged to eliminate all single-use plastic by 2022!

Similarly, the EU plans to ban many single-use plastics and is treating it as a priority.

Can you imagine waking up, brushing your teeth, hopping in the shower, and then running out of water for the rest of the day before your shower is even done? You haven’t even drank any yet! Not to mention going to the bathroom, washing your hands, doing any laundry, washing dishes, etc.

This is the amount of water the people of Cape Town, South Africa are “restricted” to today (13 gallons or 50 liters per person per day). The average 8 minute shower alone uses 17 gallons (65 liters). To put this in perspective, the typical American uses 90 gallons (340 liters) of water per day.

So what’s going on over there??

Capetonian’s have experienced an unprecedented three-year drought. The pre-climate change odds of so little rain in 2016 and 2017 was 1/1,150 or .09%. So extreme that even scientists didn’t see it coming.

In response, the city ramped up water restrictions, declared a national disaster, and even set a “Day Zero”. Had “Day Zero” come, the plan was to turn off the taps of their 4 million citizens which would’ve been a first for a major, developed city. 200 water stations would have been set up around the city. ~12,500 people would’ve lined up daily at each station for their allotted ration (6.5 gallons, 25 liters of water per person).

Thankfully, citizens cut down usage and they got some rain. “Day Zero” was pushed back to 2019. The city is investing heavily in desalination plants.

Needless to say, many citizens no longer take water for granted and have found themselves in some new and unusual situations: turning the water on and off while showering, capturing water during showers to be used for flushing the toilet, and even wondering if they should flush after peeing at a friend’s house. 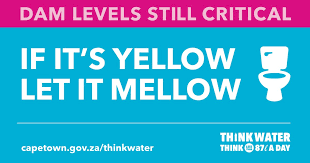 Water scarcity is increasingly becoming a problem for cities around the world. Leaders need to adjust for the change in risk brought by our new climate. Be grateful for that wonderful water and try not to take it for granted. It is truly precious!

Great 10 minute video and podcast if you want to get a better idea of what Cape Town was/is like in full on water saving mode.

“Happiness is when what you think, what you say, and what you do are in harmony.” – Mahatma Gandhi

Wasted food is responsible for 8% of global greenhouse gas emissions. If food waste were a country, it’d be the third largest GHG emitter in the world.

We’re all guilty of it to varying degrees. I forgot about two sweet potatoes just this week :/

In the US, 40% of food is wasted ($165 billion worth, 133 billion pounds), half of which happens at the consumer level. People waste an average of 1 pound of food each day, which is equal to 1/3 of calories we consume.

It’s hurting your bank account too. What would you do with an extra $640 each year?

Some tips: If you won’t use it all, don’t buy in bulk, utilize your freezer to save things from going bad, is that a sell by date or expiration date? 90% of Americans discard food prematurely due to confusion…please use your best judgment obviously, but food is often perfectly fine to eat for longer than we think.

If/when you inevitably do waste food, compost it! This prevents it from going to landfills and reduces methane emissions. 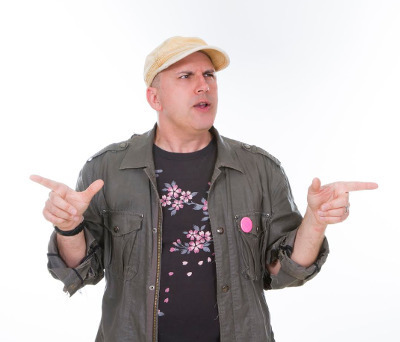 Peterson is the type of person you talk to and then find yourself thinking about certain things in new or exciting ways for the rest of the day. I just got off a call with him and wish we had another hour to keep chatting!

He is a theatrical performance activist who playfully explores gender, religion, and climate change with his one-person comedies and lively lectures. He sees all of these as human rights issues and has performed for audiences in North America, Europe, and Africa. He approaches these serious topics through humor and storytelling. His goal is to show the human element, make it relatable, and leave people more curious about the topic than they were before. His shows include A Queer Response to Climate Change—What Would Walt Whitman Do? and The Weight of Carbon Dioxide and Chihuahuas.

Climate change is the most recent issue Peterson started speaking up about. It started in 2012 when he found his husband having an existential breakdown after reading an article about climate change. As Peterson started to learn more, he saw that climate change was a social justice issue just like his other topics. One of the turning points for him was when he learned that something he cares about and thought would always be there may be in trouble – he realized the supply of his beloved pasta was at risk!

Along with his live performances, Peterson has been hosting podcasts on climate change since 2014. He recorded 50 podcasts with his organization Climate Stew and now produces Citizens’ Climate Radio (I really enjoyed the episode on mental health and climate change). If you’d like to get a taste for his performance style, I’d recommend watching this video where he goes over the different stages of learning about climate change.

Peterson often ends his live performances with a message to young people and adults. “My sister, Maria asked me one day, ‘Are you scared about climate change?’ ‘Yes, I feel alarmed no doubt,’ I told her, ‘but when I look out on an audience like you, I wonder, ‘Who is sitting in this room? What are they going to do in their lives in this incredible moment in our history.’ I told my sister, ‘No, most days I am not filled with fear. Instead I’m feeling—what an honor it is to live on the planet right now, to witness what is happening but also to be part of a group of people who are going to find solutions to make the world a better place.”

Go to previous What on EARTH’s