So far 1,216 governments in 26 countries have declared a climate emergency. They represent nearly 800 million people.

Why am I sharing this with you?

Well, mostly because it’s a BFD.

Momentum is picking up.

Governments are finally starting to take the first steps in treating the climate crisis like the emergency that it is. They’re acknowledging the truth.

And it’s largely because more and more people are rising up to demand immediate action in their communities on the scale that is scientifically necessary.

But I’m also sharing this as a friendly reminder that, generally speaking, peacefully protesting is the most effective thing that anyone can do.

It checks off all 4 of the most effective actions you can take according to climate experts. All 4 at once.

For more on why peacefully protesting is so powerful, read this.

I was recently interviewed by Boston University’s Hothouse Productions on how the media is covering climate change. It hasn’t come out yet, but the interviewees and I really hit it off so, as a thank you gift, they made me a quick 1-minute video with some of their footage. 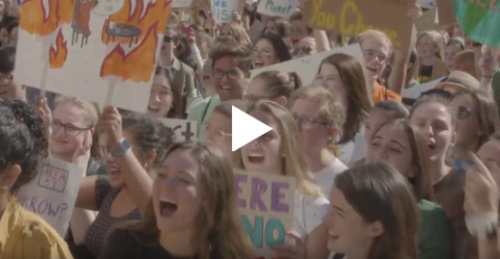 So, to reiterate, peacefully protesting is the most impactful thing you can do. It makes you feel great. And it’s working.

(Have I mentioned that New Zealand and the UK passed laws for zero emissions by 2050 on the back of these protests? Or that New Zealand hit that magic 3.5% rule where 3.5% of their population took to the streets demanding action in September?)

Last week the world went on strike again, led by the youth.

Today, thousands of others are taking to the streets again. I’ll be at Copley Square in Boston. Let me know if you want to meet up and say hi!

If you haven’t stepped up in this way yet, I hope you will at least consider it.

And if you already have, thank you. It makes a huge difference. I’d love to hear what you thought of it 🙂

Read other content from the “Exciting” section or see all sections of the What on EARTH?! sustainability newsletter.