What on EARTH?! (throwback-style for our 2-year anniversary!)

It turns out I missed the two year birthday of this newsletter (it debuted in April 2018!).

So I decided to do a throwback (of sorts) this week to the original “What on EARTH?!” structure. For those who don’t know, it was my way of using an acronym to balance the newsletter – each letter in “EARTH” got its own section…as you’ll see below 🙂

Also, before diving in, just want to give a big thank you to all of you. Every one of you make this what it is in your own ways, and increasingly together via Slack.

I especially want to thank everyone who has reached out with heartfelt notes, to all of you who have been with me from the beginning, and to folks turning these resources and ideas into real-world action!

Great article in the Boston Globe recently by Dr. Gaurab Basu, “A clean transportation system is the prescription my patients need” connecting COVID-19, environmental justice, and the climate crisis.

“My oath as a doctor is to first do no harm. But our transportation system does active harm to my patients by polluting the air and destabilizing the climate. We need to stop describing the big problems of our time, and instead act with conviction to solve them.“

💻 Tech giants relationship with big oil is on thin ice

And it’s only getting hotter, so that ice is bound to break. You see, big oil’s been lying and cheating for decades, all the tech giants’ friends are telling them to end it, and quite frankly – it’s just not healthy for anybody.

Relenting to pressure from employees and Greenpeace’s “#NoTech4Oil” campaign, Google has made the first move. “Google Says It Won’t Build AI Tools for Oil and Gas Drillers”. We’ll see how long it takes for Microsoft and Amazon to follow suit.

What’s the big deal you may ask?

Basically, the tech companies are helping fossil fuel companies to more easily discover and extract oil – effectively making the industry that is hell-bent on destroying life on earth better at doing just that.

So, though I applaud Microsoft and others on their unprecedented climate ambition, I also know about their dirty little secret… 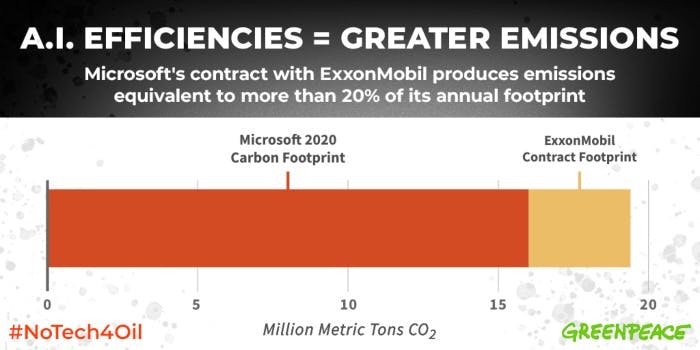 As we know, the science is clear that most of the fossil fuel reserves need to stay underground to keep temperatures at less catastrophic levels.

So, despite being climate leaders in some respects, the tech giants still have some growing up to do.

This happened a few months ago, but it is a huge deal. Billions of dollars have been spent to stop action on climate in what the Drilled podcast series has called “the propaganda campaign of the century”. A lot of that has gone to media companies in a strategic campaign to influence public perception and media organizations themselves.

“How far can journalism go when it is bankrolled by forces that have everything to gain from blocking large-scale action to address our climate crisis?” – Andreas Gustavsson

Think about it – are Exxon, Shell, and BP competing for which gas station you’ll choose? …give me a break.

The Guardian has also updated their language to more accurately convey the urgency of the climate emergency in their reporting.

Others should follow suit if they expect us to fully trust their work in my opinion.

…this will make the last seven years the seven hottest on record. FYI – If you’re under 35, like me, you’ve never experienced a cooler than average month (using 1951 to 1980 baseline temperatures).

The Arctic’s average temperature was 17°F (9.4°C) above normal last month (…yes, over the course of the entire month).

🌀 Cyclone Amphan displaces millions of people in India and Bangladesh

This was the strongest cyclone ever recorded in the Bay of Bengal, likely because ocean temperatures were up to 5°F (2.8°C) warmer than usual.

Over 3 million people evacuated their homes. At least 100 people died (though the official number is going up) from collapsing buildings, falling trees, and electrocution from power lines.

Thousands of homes were destroyed, as were many livelihoods (e.g. farmlands destroyed by saltwater flooding will be infertile for years to come).

*Here’s what locals are saying*

“Never seen such a disaster before…At one end there is this small Covid virus that is terrifying people – this was another virus from the sky.” – Mamata Banerjee, West Bengal’s chief minister

“Our village has been reduced to rubble,” – Israar Kamal

“Sometimes I feel that the international community has also abandoned us. They have left us to die slowly. The West is largely responsible for global warming, which has resulted in higher sea levels. We are the ones who have to suffer because of it. Still, we don’t see any international initiative for our protection.” – S M Shahin Alam, 19-year-old Bangladeshi

“Let your joy be in your journey – not in some distant goal.” – Tim Cook

(^^I’ve been trying to get better at this)

“You could leave life right now. Let that determine what you do, say, and think.” – Marcus Aurelius

Haven’t talked about food in a while. Here are two good resources for info!

😋 “Your Questions About Food and Climate Change, Answered”

🐄 “Why Beef is the Worst Food for the Climate” 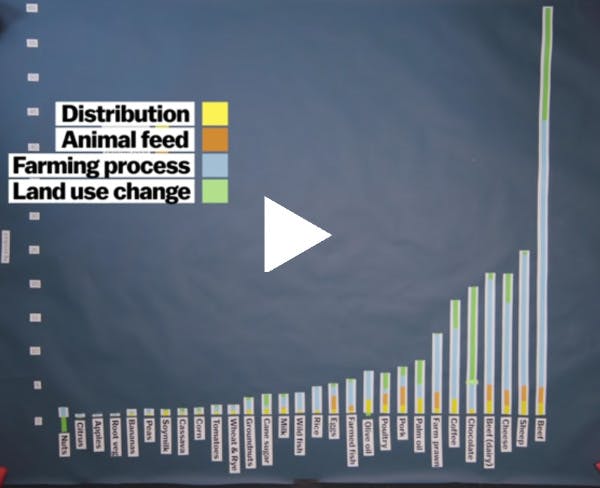 …how I think about food and diet are mentioned near the end of this article in case you’re interested (I’m currently a flexitarian).

📚 Kim Stanley Robinson is an award-winning climate fiction author of 19 novels. The Atlantic has called his work “the gold-standard of realistic, and highly literary, science-fiction writing.”

His recent article in the New Yorker, “The Coronavirus Is Rewriting Our Imaginations”, is definitely worth a read (Full disclosure: this is the main reason I chose him).

Has anyone read one of his books before?

I’ve been meaning to check one out for some time. If you have any suggestions I’d love to hear them – or better yet, post it in the #books channel in the Crowdsourcing Sustainability slack community so everyone can see! (Invite is here if you haven’t joined yet.)