Better understanding the many racial and environmental justice connections.

A couple of weeks ago, I wrote about how I needed to improve and be a better ally to the Black Lives Matter movement. A part of my action so far has been to better educate myself on the intersection of racial, environmental, and climate justice.

So I’ve been doing lots and lots of reading and listening.

For those on a similar journey, or anyone just looking for high quality content to help spread awareness, these are a few of my favorite insights and articles so far:

“Racism is Killing the Planet” by Hop Hopkins may be the most useful thing I’ve read so far in terms of clearly connecting a lot of dots. Powerfully written, he takes you all the way from colonialism to white supremacy, neoliberalism, environmental justice, and the climate crisis.

In case you’re unfamiliar, a sacrifice zone is the term used for communities that are right next to power plants, industrial factories, etc. and are constantly exposed to pollution (aka poison). These are usually low income communities, predominantly made up of people of color. The most obvious example in the US is Cancer Alley in Louisiana where people are 50 times more likely to get cancer than the average American .

2. Mary Annaïse Heglar’s “We Don’t Have to Halt Climate Action to Fight Racism”

If you’ve been getting this newsletter for a while, you know I’m a huge fan of Mary. This is from her latest:

“It’s been documented again and again that climate change hurts Black people first and worst — both in the United States and globally. Moreover, Black people did the least to create the problem, and our systemic oppression runs directly parallel to the climate crisis.

Climate change takes any problem you already had, any threat you were already under, and multiplies it. When you take a population that has lived in chronic crisis, under constant threat, for generations — from police violence to housing discrimination to general disenfranchisement — and add yet another threat? That’s not just a recipe for catastrophe. With the climate crisis itself — the storms and the temperatures — it’s not so much that the game is rigged, it’s the playing field. Climate change is not the Great Equalizer. It is the Great Multiplier.

I heard this term for the first time in Leah Thomas’s article, “Why Every Environmentalist Should Be Anti-racist”.

Here’s how she defines it: 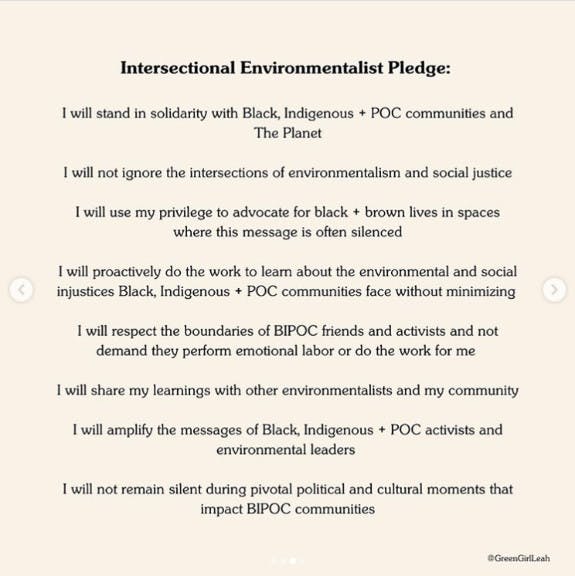 This weekend is Juneteenth, “a day that honors Black freedom and Black resistance, and centers Black people’s unique contribution to the struggle for justice in the U.S.”

This is going to be a big weekend of action. You can get involved in many ways, but here’s a link to find organized events.

This is an incredibly important message for us to know and spread awareness of right now.

Think about it. These are a few of the mega-trends currently unfolding:

What does this mean?

It means that we have an unprecedented opportunity for meaningful, systemic change on climate and racial justice. By prioritizing and vocalizing these ideas and policies, it’s going to both increase the chances of defeating Trump and improve the chances of passing green recovery packages rooted in justice.

The time to push for bold, intersectional climate action is now.

And it is clearly a winning issue.

Quotes from the researchers

Study referenced above: “Combining climate, economic, and social policy builds public support for climate action in the US”

“Policy packages that invest in clean energy and transportation are more popular than coronavirus spending that ignores the climate crisis.”

“We find that policy packages that address the climate crisis alongside income inequality, racial injustice and the economic crisis are more popular among voters.” – Parrish Bergquist, Matto Mildenberger, and Leah Stokes

The Green New Deal is looking sweeter every day.