Get who’s ready to act now. And go.

Humanity needs to limit warming as much as possible to prevent unimaginable amounts of suffering, death, and potentially even societal collapse. (Haaappy Thursday! …stick with it – gets better in a bit.)

The Paris Agreement aims to limit warming to 2°C, with an aspirational goal of 1.5°C. The IPCC has said 2°C would be “catastrophic”. The island nations call it “genocide”.

But we’re currently on track for a 3°C to 4°C warmer world (closer to 3°C). The world bank said, “there’s no certainty that adaptation to a 4°C world is possible…the projected 4°C warming simply must not be allowed to occur.”

No. I think you and I and millions of other people are snapping out of the deadly status quo, seriously stepping up our game, and will ultimately work together to do what needs to be done to both prevent the worst and rebuild a better world.

Where we stand today

To achieve 2°C, the current Paris Agreement pledges must be tripled.

This difference between where we are and where we need to be is called the emissions gap. 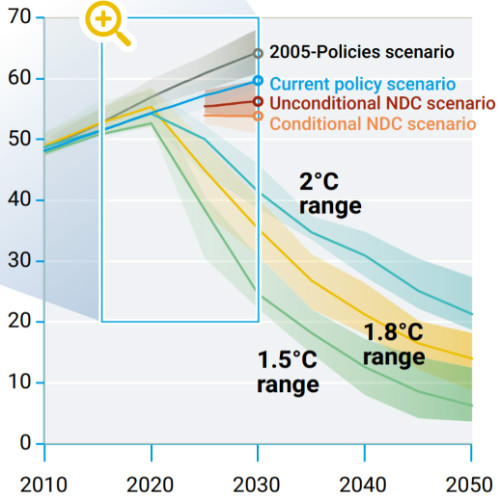 Saul Griffith translated what this means saying, “At this point, basically, to hit any reasonable climate target, you need 100% adoption [of emission-free cars, power plants, heating systems, etc.] at everyone’s next purchase.” This is because the “committed emissions” of our existing infrastructure will emit all of the emissions allowed in our carbon budget.

So the question is…

How do we close the gap between where we are headed and where we need to go?

We get the people in power (both in our governments and corporations) to prioritize the climate crisis. We need them to take steps to get on the scientifically mandated pathway to zero emissions.

(Individual actions help in multiple ways and are worth doing, but alone they aren’t even close to enough. See Bill McKibben’s quote here.)

How do we get the people in power to do this?

We force them to (nonviolently, of course).

The recipe is simple: use perseverance and strength in numbers. By organizing with our peers, speaking up, and taking strategic action, we will get our companies, schools, communities, states, and countries on the right track.

This has been proven to work time and time again.

Which brings us to the next questions:

How many people need to step up?

And how do we get them to do it?

How many people do we need to step up to make meaningful changes?

“No single campaigns failed after they’d achieved the active and sustained participation of just 3.5% of the population. And lots of them succeeded with far fewer than that.” – Erica Chenoweth

Erica’s exhaustive research shows that it only takes 3.5% of a population’s active, sustained, and non-violent participation to win a political struggle.

She looked at regime changes on the national level in many cases.

If 3.5% of the people in your school, company, city, or country, get vocal and sustain your actions to demand that leadership eliminate emissions on the timeline the science demands, you will succeed.

Today, the majority of the world’s countries and institutions have closer to 0% of people actively demanding this than 3.5%.

Where 3.5% has been reached, meaningful changes have been made.

New Zealand had 3.5% of the population striking in September. Shortly after they passed a bill to eliminate emissions by 2050.

Over 1,200 governments representing 10% of the world’s population declared climate emergencies in 2019 on the back of growing protests.

Of the 750,000 Amazon employees, just over 1% of them (8,700) are demanding climate leadership. Amazon is already responding with meaningful steps in the right direction.

At this point, I asked myself, what stops good, aware people from acting on climate? (I asked it on Twitter too and got some good responses.) After all, 66% of Americans are worried about global warming.

And although that is both useful and interesting research to dive into (let me know if you’d like me to get into it another time), it’s the wrong question given our time crunch.

The right question to ask first is:

How many people are already actively engaged today?

Climate strikes are the ultimate lever of influence.

Most countries put the US to shame this year with much higher participation.

But I reached out to the experts at Yale and George Mason and they shared some little-known, useful, and encouraging data about the US.

In April of 2019, 2% of registered US voters said they “are currently participating in a campaign to convince elected officials to take action to reduce global warming.”

And a whopping 25% of people in the US say they definitely (7%) or probably (18%) would participate in said campaign.

And 2% are already active in one way or another.

But there’s an additional 25% of people who want to get active but aren’t yet.

So let’s focus our efforts on finding, activating, and getting this 27% of people onto the same page.

Others who care will follow suit once this minority shows them the way.

We need to act now.

We already have enough people to start making the systemic changes necessary.

So let’s find these wonderful people, build relationships, work together, and make it as easy and enjoyable as possible for them to do what they already want to do. Some may already be working on the issue but with a different team. Get on the same page – multiply your collective impact.

You can do this in your community, school, state, country, and company.

Find the 27% of people who already are or want to participate in a campaign to convince leaders to help stop global warming. Or even just 3.5% of them.

Start organizing with those who are already ready to act now.

66% of Americans are worried about global warming. People will follow leadership on this issue.

This is how we win.

“People with passion can change the world for the better. Those people who are crazy enough to believe they can change this world are the ones that actually do.” – Steve Jobs