“We think the Economics of Renewables Are Impossible for Oil to Compete With.”

This is what BNP Paribas, the eighth largest bank in the world, is now telling investors.

It comes from a recent analysis they did to answer the following question:

“For a given capital outlay on oil and renewables, how much useful energy at the wheel do we get?”

In other words, do you get more bang for your buck (miles driven) by investing in new oil wells or renewables?

Their findings are remarkable.

“Our analysis indicates that for the same capital outlay today, new wind and solar-energy projects in tandem with battery electric vehicles will produce 6x – 7x more useful energy at the wheels than will oil at USD 60/barrel for gasoline powered light-duty vehicles.“

Helpful for the chart below: EROCI = ‘energy returned on capital invested’. TWh = TeraWatt hours which is a unit of energy being used on the Y-axis.

Think of it like this: Each bar shows the relative distance cars would be able to travel given a $100 billion invested in the respective energy-sources. It’s like the ‘miles per gallon’ of various energy sources. 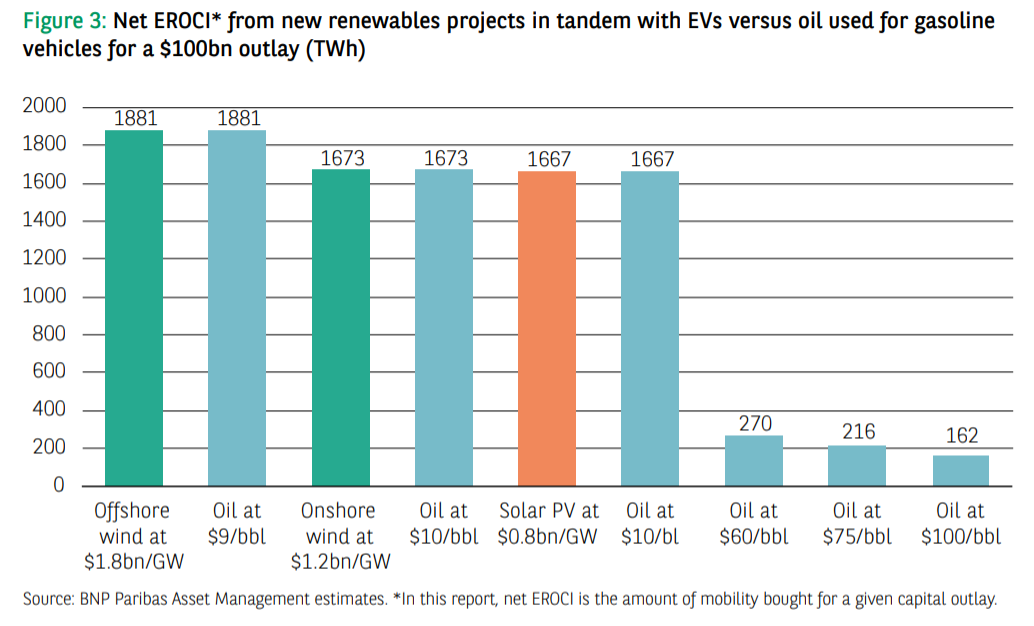 So investing in solar and wind energy projects gives us 6 to 7 times more energy at the wheel (miles driven) compared to the same investment in oil right now. As of this week, oil is just under $60/barrel. It would have to be produced at $10/barrel to be a smart investment.

“The oil industry has never before in its history faced the kind of threat that renewable electricity in tandem with electric vehicles poses to its business model: a competing energy source that:

We conclude that the economics of oil for gasoline and diesel vehicles versus wind and solar-powered EVs are now in relentless and irreversible decline, with far-reaching implications for both policymakers and the oil majors.”

Final insights from “The Energy Gang” podcast on this research: