Two things for you today. A dose of despair/reality-check followed by a genuinely exciting development:

Don’t it always seem to go, that you don’t know what you got til it’s gone?

There have been three big reports that have caught my eye on biodiversity and the web of life recently.

Why does this matter?

“It should be of huge concern to all of us, for insects are at the heart of every food web, they pollinate the large majority of plant species, keep the soil healthy, recycle nutrients, control pests, and much more. Love them or loathe them, we humans cannot survive without insects.” – Professor Dave Goulson

“We are sleepwalking towards the edge of a cliff. If there was a 60% decline in the human population, that would be equivalent to emptying North America, South America, Africa, Europe, China and Oceania.” – Mike Barrett, Executive Director at the World Wildlife Fund

The third is actually the biggest study by far. It was done by the IPBES which is known as the “IPCC for biodiversity”.

Nearly 500 experts looked at 15,000 studies in 3 years to outline the impacts of economic development on the plants and animals making up our ecosystems.

3. I’ll let the original heading and quotes speak for themselves:

Most comprehensive assessment of its kind;
1,000,000 species threatened with extinction

“The overwhelming evidence of the IPBES Global Assessment, from a wide range of different fields of knowledge, presents an ominous picture,” said IPBES Chair, Sir Robert Watson. “The health of ecosystems on which we and all other species depend is deteriorating more rapidly than ever. We are eroding the very foundations of our economies, livelihoods, food security, health and quality of life worldwide.”

The five biggest culprits of destruction over the last 50 years:

“Current negative trends in biodiversity and ecosystems will undermine progress towards 80% (35 out of 44) of the assessed targets of the Sustainable Development Goals, related to poverty, hunger, health, water, cities, climate, oceans and land (SDGs 1, 2, 3, 6, 11, 13, 14 and 15). Loss of biodiversity is therefore shown to be not only an environmental issue, but also a developmental, economic, security, social and moral issue as well.“

“The Report also tells us that it is not too late to make a difference, but only if we start now at every level from local to global,” he said. “Through ‘transformative change’, nature can still be conserved, restored and used sustainably – this is also key to meeting most other global goals. By transformative change, we mean a fundamental, system-wide reorganization across technological, economic and social factors, including paradigms, goals and values.”

You’d never know it based on mainstream news and what we talk about day to day…but the fact of the matter is we’re living through the beginning of Earth’s 6th mass extinction event.

The old way of thinking, the way our system works now, what we were told growing up – this “conventional wisdom” of how things should work – it’s on track to destroy our relatively prosperous and peaceful way of life.

You know this already, but may I remind you of a simple fact – we are nature.

…and I don’t know about you, but I haven’t figured out how to eat or drink money yet. 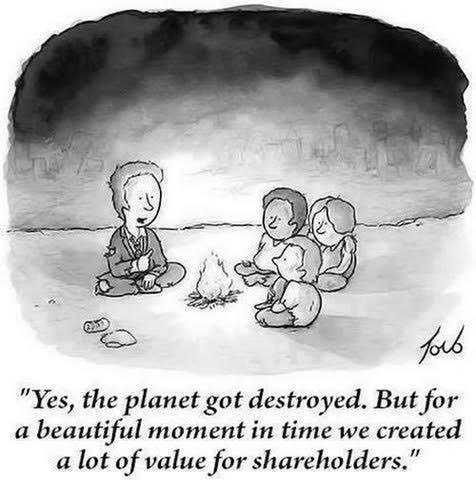 Is Jay Inslee’s Evergreen Economy Plan the Roadmap to a Sustainable US?

I’ll start off by saying that I understand – as of today it’s a total longshot that Washington Governor Jay Inslee becomes the next President of the US. Not many people know him. But I think he’s head and shoulders above the rest on climate change so, as of now, he’s #1 in my book (I like others as well though).

Jay clearly understands the urgency of our situation a bit better than the rest and is the most experienced, knowledgeable, and qualified when it comes to tackling climate change.

Jay is running on climate change and envisions what amounts to his own version of a Green New Deal that would put people to work on solving climate change.

But instead of simply stating the goals like the Green New Deal does, Jay is tackling the nitty gritty details of how to actually get it done. He’s bringing the vision to life and making it seem less pie in the sky and more achievable with every line of his “Evergreen Economy Plan”. As Dave Roberts wrote, “Jay Inslee is Writing the Climate Plan the Next President Should Adopt”.

Policy wonks are loving it. Check out this podcast, article, or the full document itself (it’s just part 2 of several) to really dig in.

Here are the high level takeaways:

Jay will be in the debates. It seems unlikely that any other candidate will top his “Evergreen Economy Plan” (fantastic if they do!). It’s remarkably comprehensive, thoughtfully crafted, and we haven’t even seen all of it yet (only 40 pages so far).

As Dave Roberts suggested, I hope that whoever does become President takes Jay Inslee’s Evergreen Economy Plan with them to the White House…and ideally bring along Jay himself (assuming he doesn’t pull off a cinderella story to become President himself).

“A goal without a plan is just a wish.” – Antoine de Saint-Exupéry

I hope you have an amazing weekend!