Air pollution is in our hearts

Billions of air pollution particles were just found in the hearts of city dwellers my age.

This makes my blood boil.

The climate crisis aside for a second – this is so basic. We should not allow dangerous pollutants into our hearts. You know, those things that keep us alive.

But it’s 2019 and 91% of the people on Earth live with toxic air. The World Health Organization’s Director General has said, “No one, rich or poor, can escape air pollution. It is a silent public health emergency.”

The truly maddening part is that we have the solutions readily available to fix this. We just need to decide it’s what we should do. And then go make it happen.

This latest study builds on a mountain of research showing the strong links between air pollution and many different diseases.

The last time I wrote about air pollution, I mentioned a bunch of eye-opening stats: 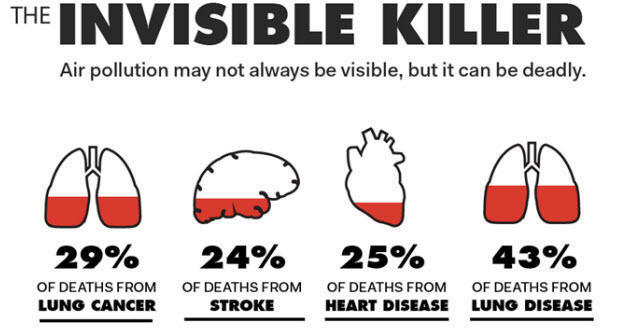 Although many studies have come before it, this one is the first to show how it may actually work when it comes to heart disease.

Researchers found between 2 and 22 billion nanoparticles of pollution per gram of heart tissue in the 72 hearts they examined. City dwellers had 2 to 10 times more than people who lived outside of the city.

There is a lot to be learned. But generally speaking…

Cities have some of the worst air pollution because of all the vehicles, industry, and buildings burning fossil fuels. Apparently even the friction from cars braking throws metal nanoparticles into the air.

People’s proximity to this pollution has been shown to increase their chances of risk to the diseases mentioned above. Living or working near highways, busy roads, and intersections is particularly bad. As is driving on highways or in traffic.

The nanoparticles of pollution pile up in the heart’s muscular tissue and were even found in the mitochondria – aka the energy source that makes your heart pump.

These nanoparticles are 1/1000th the width of a human hair, so the thinking goes that they enter our bloodstream and are transported to everywhere in our bodies.

So what? The air is good where I live

Perhaps it is better than most places. Depends where you live.

But I can assure you it could be far cleaner. And it should be.

Maybe if you see something else that’s invisible to our wildly limited vision, you’ll understand a bit better.

This is a video that shows CO2 – invisible to the naked eye – coming out of our vehicles, factories, and more. I would imagine this is a decent proxy for seeing the air pollution we breathe because CO2 is just another byproduct of burning fossil fuels. 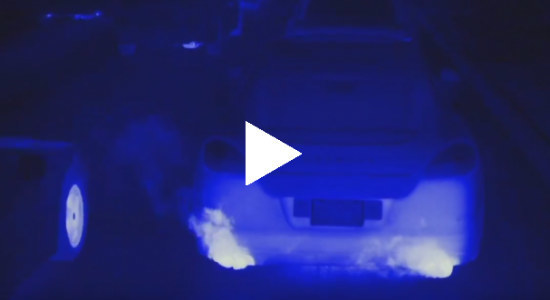 If greenhouse gases and air pollution were visible to us, we would’ve solved these massive issues a long time ago.

I haven’t heard back from the lead researcher yet to get my questions answered. But I think it’s fair to say we all have millions or billions of air pollution nanoparticles in our bodies and hearts right now. It’s kind of unavoidable living in the world as it is today.

Professor Barbara Maher, who co-led the study said, “There is absolutely no reason to expect this would be different in any other city.”

Last night, as I was lying in bed, I noticed my heart beating. Something I don’t do often enough.

I couldn’t help but wonder how much pollution it was holding – fighting against.

And how much of my life may ultimately be stolen from me simply because of the air that I breathe?

This makes me feel all sorts of things, but I end up at angry. I hope it makes you angry too.

And I hope you take the time to figure out where the anger comes from.

For me, it comes from a strong sense of what’s right and what’s wrong. It comes from a sense of justice. This toxic air as harming me, my family, friends, and all life on Earth.

I don’t want anyone to be physically harmed by the air they breathe.

In other words, the anger comes from a place of love. I love life and the people everywhere who make it wonderful.

Our time on Earth shouldn’t be stolen from us – especially for something as straightforward and solvable as this.

We all deserve better.

And whether you like it or not, this is our problem to solve. Nobody else is doing it for us.

We all need to step up and help to fix this. I needn’t point out the dual crises it solves.